Life of the Party Walls - Abuse and Neglect (Part 2)

Party wall law began in England, in response to problems that arose when individual row houses were demolished leaving adjacent homes, inadequately supported. The beauty of row home construction was economy of scale and maximal land use, at the turn of the century. Row houses were built in such a way that each shared walls with a neighbor on either side except for the end units, which had only one shared wall. Shared walls were never a problem until of course they were no longer shared. 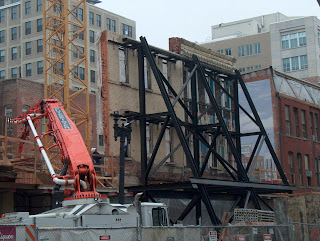 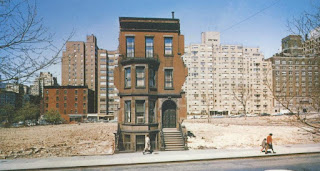 (source unknown)
Many row houses were constructed as rental housing for workers. They were not always well built and many were very poorly maintained. So, it was not surprising to encounter homes that had deteriorated to the point of collapse, in the middle of a row of homes. When these neglected and abused homes were demolished, unless the intrinsic weakness of the shared wall was recognized and adequately supported, both of the neighboring houses were immediately at risk of collapse. It became a house of cards. Laws and codes were written to protect both parties since each had a stake in what happened to “their” wall. It was like a three-legged race. What happened to one, affected the other. 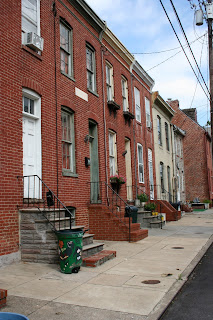 Baltimore is famous for its many late 1800’s worker row houses, which are very similar to those in England. Today sadly, one can see many examples of buildings in the middle of a row of Baltimore homes, burnt out and starting to collapse through neglect and abuse. This is classic urban decay. Perhaps these are fallow fields simply awaiting a natural death and the bulldozers of development. Who knows?

The author has concluded, from “walking around observation” of various local building disasters, that on each occasion the cause was lack of knowledge and understanding of party wall principles – essentially construction incompetence. The construction complications shown in Figures 1 and 2 were entirely preventable. 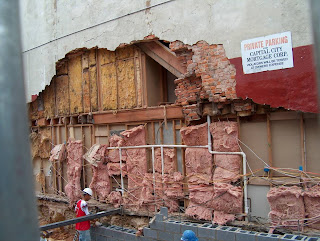 (Figure 1.) Durr Alley construction project where the neighboring wall was not underpinned adequately prior to excavation of the basement of the home. 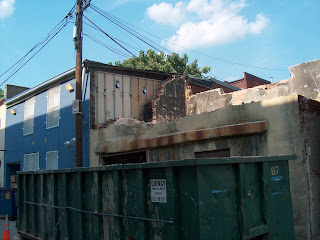 (Figure 2.a) Naylor Court construction project where the stable at 1316 9th Street rear proved to be so solid, that in the process of its destruction, the literal “party wall” in VIP Lounge in the nightclub next to it (now the MOOD Lounge) was breached, exposing speakers and dry wall. 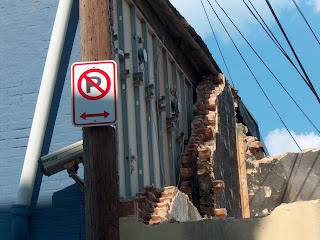 (Figure 2.b) The raze permit had been issued based on the premise that the stable was falling down. In fact it was actually rather difficult to tear down! 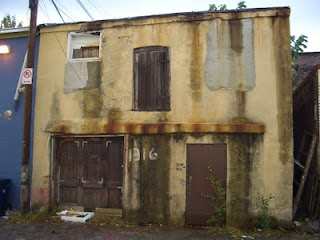 (Figure 2.c) The "unstable" Lincoln era stable had been quite stable.

3307.2.1 Underpinning party walls. In the case of existing adjoining or party walls, which require underpinning, proper underpinning shall be provided in accordance with applicable sections of this code whether or not written permission to enter the adjoining lot is granted.

Functions of the Mayor’s Agent
104.5 (page 13)
The Mayor’s Agent determines if historic landmarks or contributing buildings in historic districts are threatened by demolition by neglect*, and pursues appropriate remedies pursuant to the Act.
(a)     This authority may be exercised by the Historic Preservation Office under the supervision of the Mayor’s Agent.
(b)       The Historic Preservation Office may pursue enforcement remedies with the assistance of the Office of the Corporation Counsel, the Department of Consumer and Regulatory Affairs, or other agencies as appropriate.

In many ways, buildings are like people. They age. They show signs of wear and tear. Some have hard lives and some have lives of grace and ease. Some are cared for and others are abused. Many show their scars. Others have makeovers. Some become fragile and decline while others live for centuries.  Unlike people, however, buildings are defenseless and cannot protect themselves from abuse and neglect (blight). Nature takes over and ultimately wins. Mortar escapes and is replaced by seeds of grass, weeds or even the seeds of trees carried by the wind, small animals or other vectors. The backbones of buildings (roofs) weaken and collapse. Many think of buildings as dumb, dead and disposable. Others think of buildings as reflective of the many lives they have lived. A collection of small buildings such as in Naylor Court is valued because of the aggregate and the sense of place that is conveyed. Dismantling the collection, one chipped component at a time diminishes the meaning of the place and eventually destroys it altogether. An excellent example of this obliteration endpoint - where there is nothing left to salvage - is Shepherd’s Alley.

When people who are unable to defend themselves from threats of injury seek protection, the courts can intervene through either protective custody or restraining orders against the threatening party. A requisite condition for this to happen is the ability to conclusively prove the intent to harm. In the case of the little brown National Register building in the Naylor Court alley (1322 9th Street rear), the owner has declared his intention to obliterate the building. This is the ultimate threat.

Fortunately for the alley, all of the buildings in it and in its sister block Blagden Alley, have been recognized for their uniqueness by being listed in the National Register of Historic Places since 1990. This designation is much more prestigious than simply existing in a "historic district." This is a critically reviewed nomination for recognition of the contribution of the location to the history of the city. 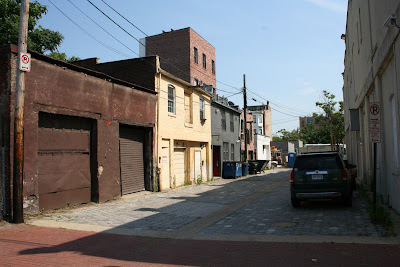 (Fig. 1) Recently the yellow stable was rescued and adaptively reused in elegant ways to become part of Darryl Carter’s new retail enterprise - below. 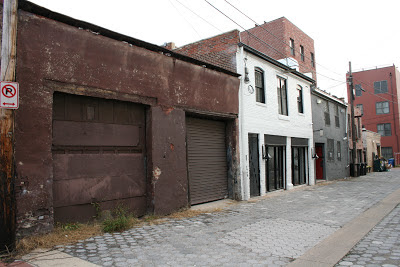 (Fig. 2) The alley building currently threatened with destruction is to the left of the restored stable.
According to Mr. Steve Callcott (Deputy Preservation Officer) in the Historic Preservation Office
“The owner of 1322 9th Street has filed a raze application with the Department of Consumer and Regulatory Affairs.  We have alerted DCRA that the property is in an historic district and the application must be referred to our office for review, and they have ensured us that there is a “hold” on the application and that no permit will be issued without historic review.  Brendan Meyer in our office, who will be our project reviewer on this, will be contacting the owner to advise him of our review process and that the application will need to be forwarded to the Historic Preservation Review Board for its review.  Once we receive the application, we will post it on our public notice and schedule it for hearing before the HPRB to allow for community comment. (January 24, 2013)”

According to Mr. Brendan Meyer (Historic Preservation Specialist and project reviewer - HPA case #13-091) in the Historic Preservation Office:
“The building currently is qualified as a contributing building in the historic district. If that status remains unchanged by the Board, the raze application would then need to be heard by the Mayor’s Agent at a public meeting.
This is a lengthy and thorough process that has just begun. Under the regulations, a raze permit for a contributing building, although very rare, is a possible outcome. The HPRB and Mayors Agent hearings are open to the public so I encourage you to follow this case as it moves to the Board and to participate in the proceedings.” 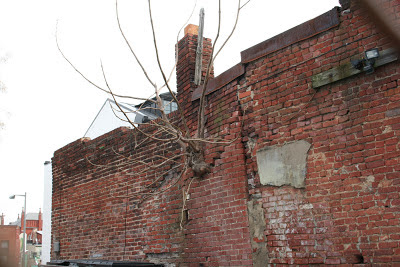 (Fig. 3) North facing wall shows the elements of two sections of the building one of which has become the host to a rather large “tree” growing out of the side.


The small tree growing out of the side of the north-facing wall (Fig. 3) is not a bonsai. It’s an opportunistic growth that has reached considerable girth and bears witness to the length of time that this particular segment of the wall has been crumbling. Tree rings are easy to count! The roof has collapsed. The property is relatively unsecured and the building has become home to large rats that feed on the alley garbage from the nearby restaurants. It has also been suspected of being a place of criminal activity. 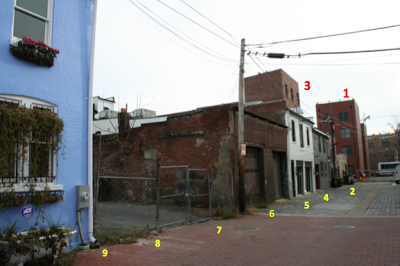 Over the years the small buildings in Naylor Court and Blagden Alley have been either willfully destroyed or allowed to deteriorate to the point that they destroy themselves by neglect. In figure 4 one can get an instant appreciation of the problem. Frequently, each property owner views only their own property without consideration of the collection of buildings and the impact of their actions on the rest of the alley.

Recently a former commercial garage in Blagden Alley (figures 5 and 6) was spared obliteration that had been proposed by developers. In that case, Mr. Brendan Meyer wrote the following in his HPRB Staff Report and Recommendation (HPA #12-503 - November 1, 2012)

“The street-fronting portion of the subject site is vacant, while the rear of the rear of the lot is occupied by a large one-story garage. Permit and map research indicate that the garage’s eastern-most portion was built as two-story alley dwellings in the 1880s which were combined, added on to in the rear, and altered by the removal of their second floors in 1922 for conversion to an automobile garage. The building was expanded to the west again in 1924, and again to the south in the mid-20th century with a concrete block addition. The building’s early residential use, conversion to automobile use in the 1920s, and vernacular brick construction are consistent with themes established in the Blagden Alley Historic District nomination; due to its date of construction/alteration prior to 1941 and basic integrity of form and materials, all but the concrete block portion of the building should be considered contributing to the historic district.” 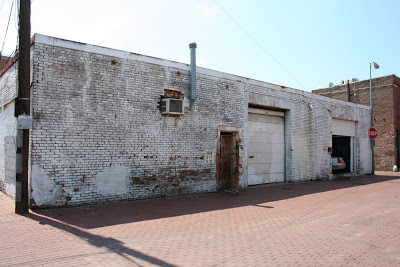 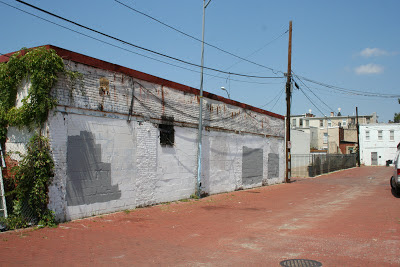 
The approach to the little building on 1322 9th Street should follow the national guidelines outlined below.

“Stabilize Deteriorated Historic Materials and Features as a Preliminary Measure

“Deteriorated portions of a historic building may need to be protected through preliminary stabilization measures until additional work can be undertaken. Stabilizing may include structural reinforcement, weatherization, or correcting unsafe conditions. Temporary stabilization should always be carried out in such a manner that it detracts as little as possible from the historic building’s appearance. Although it may not be necessary in every preservation project, stabilization is nonetheless an integral part of the treatment Preservation; it is equally applicable, if circumstances warrant, for the other treatments.”
(From - The Secretary of the Interior’s Standard for the Treatment of Historic Properties – with Guidelines for preserving Rehabilitating Restoring and Reconstructing Historic Buildings, by Weeks and Grimmer, page 19).

This building needs to be stabilized immediately.  It should then be allowed to live and ultimately be restored and adaptively reused so that the dwindling collection of small alley buildings in this historic alley block is kept intact from this day forward. When one compares the block maps from the middle of the last century to maps of today, this block  (0367) now looks like Swiss cheese with empty lots where buildings have collapsed and been allowed to die through abuse and neglect over recent decades.  The buildings have progressively been replaced by parking lots – some legal and some questionable.

It is also highly likely that this property has been heavily contaminated by years of drained and dripped oil from hundreds of cars being stored or worked upon. This is another serious agency (EPA) issue for this property.

Automobile repair shops were a very high profile part of the 20th century history of many D.C. alleys, when the need for stables declined. The stables were adaptively converted and served the community superbly for decades. These were not high end businesses, but they filled a low end need. To preserve the history of an area or a collection of buildings, agencies and individuals responsible for preservation need to preserve the essence of the area, not just the charming or esthetically appealing buildings.

So, let’s be consistent with the precedent that has recently been set by HPO and use the same lens and metrics for HPA case #13-091 (outcome pending). 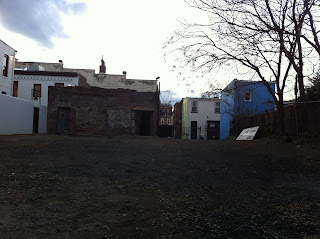 Posted by Unstable Lives at 7:47 AM 6 comments: Links to this post