Toronto’s committee of adjustment decided Wednesday [June 11 2014] it would not permit a coach house built in 1889 to move uptown.

From the Toronto Star Newspaper - http://www.thestar.com/news/gta/2014/06/11/committee_rejects_application_to_move_coach_house.html

A coach house built in 1889 will not be making a historic trip across Toronto, after a city committee rejected an application to move it from downtown to midtown.
The 3,000-square-foot building at 19 Isabella St. is part of Casey House, an HIV/AIDS hospital, and is slated to be demolished this fall to make way for a new facility. It was offered up for free, provided someone could move the building by Labour Day.

Toronto entrepreneur Robert Hiscox offered to spend $1 million to move the coach house to one of his properties, 92 Roxborough St. in Summerhill.
Two dozen area residents turned out to Wednesday night’s committee of adjustment meeting and more than 70 sent letters opposing the move.

Hiscox had asked to sever the property, creating a second lot for the coach house, and had applied for 19 variances from city planning rules. Committee members were not persuaded the proposed two large houses on small lots would fit in with the neighbourhood. 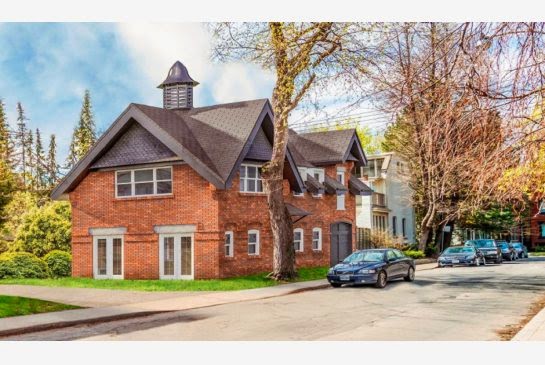 Hiscox, who was not at the meeting, did not rule out an appeal to the Ontario Municipal Board.
“It’s sad news. We always knew it was a challenging application, but we believe it’s the right thing to do for the city, for the neighbourhood and our shared history,” Hiscox said after learning of the decision.

He said more than 700 people signed his online petition to “Save the Coach House.”
Problems cited by several speakers included the removal of mature trees; loss of privacy, light, views and space; loss of neighbourhood character and setting a precedent for building on Molson St., which has never been an address for houses, only garages.

Many also worried the coach house would prove impossible to move in its entirety and that just a handful of bricks would make it to the new site.

“People are very concerned about the neighbourhood. We love our neighbourhood and we are trying to preserve it the way it is,” said Lianne Miller, who has lived on Macpherson Ave. in a home adjacent to the proposed lot for 22 years.

Eileen Costello, the lawyer representing Hiscox and his real estate company, Constantine Enterprises Inc., said her client’s intention was to leave the house intact but could not guarantee the final design.
Edward S. Rogers, deputy chair of the Rogers Communications board of directors, and Suzanne Rogers are listed as directors of Constantine Enterprises on corporate documents which state its corporate headquarters as the Rogers building on Bloor St. E.

But the coach house project is not affiliated with Rogers Communications, Hiscox said.
Neighbours’ concerns that moving the coach house was motivated by profits on future developments are unfounded, he said. “It’s not a business endeavour we’re going through. We’re trying to do something nice.”

Councillor Kristyn Wong-Tam, who initially floated the idea of moving the coach house, had said it “remained to be seen” whether Roxborough St. was the right place for the building and that others had expressed interest as well.

What I find comical is the self righteousness of some of these area residents. It was mentioned during the hearing that the 2 houses on MacPherson, north of Mr Hiscox property, complained about the view they would lose if the Coah House is placed at 92 Roxborough. What view? The one they each clearly have looking into Mr. Hiscox backyard from their second floor balconies? This hearing only showed the demeanor of the area and the fact that they feel everybody's business is their business. Don't forget the individual that writes the blog about Yonge and Roxborough. Reporting on who's doing what in the neighbourhood from people walking their dogs, to what they're driving, and even who's fixing their roof. Seriously? I'd hate to live in this area.
Posted by Unstable Lives at 5:36 AM No comments: Links to this post


Hiscox was taken aback by the idea that he was “trying to pull a fast one” on neighbours. In response, he bought the web domain savethecoachhouse.ca to rally supporters.
“(The plan) was to be very straightforward, upfront, and gain support of folks. It’s a little complicated what we’re doing and it’s a great thing for the neighbourhood,” he said.
While James Nadler understands his neighbours’ concerns about congesting Molson St., he says accusations of ugliness are unfounded.
“I think it is attractive,” said Nadler, a Ryerson radio and television arts professor who lives in the area. “Esthetically it would be better to have it there than what is there currently… I’d love to see the building saved.” 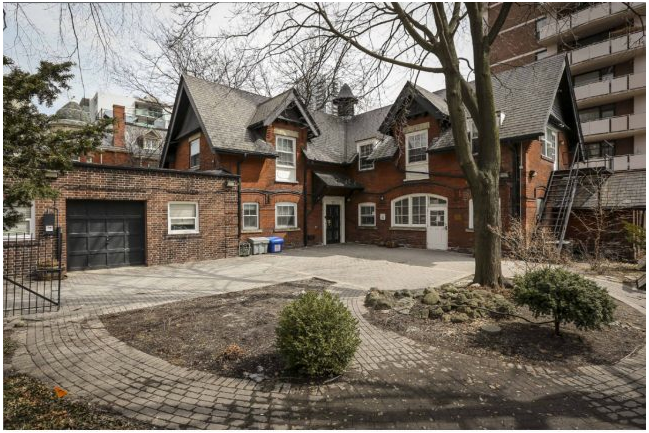 The final decision will come June 11, when the committee of adjustment gathers to address the case. If the application is denied, Hiscox insists that won’t spell the demise of the coach house.

“We’re not in the business of backing away meekly. We’ll evaluate our options,” he said. “We can look at storing the coach house if we have to.”
http://www.thestar.com/news/gta/2014/05/23/neighbours_balk_at_1m_plan_to_save_a_free_historic_toronto_coach_house.html

But there are complications. For one thing, the move would require the city to make all sorts of complicated exceptions to its by-laws; for another, neighbours say the introduction of the historic building would utterly decimate their way of life. “It’s just plain ugly,” Peter Rehak, one of several participants in a recent community meeting about the proposal, told the Star. “It would destroy how the neighbourhood is set up.” The site is currently occupied by a three-car garage, as God apparently intended.
http://www.torontolife.com/informer/random-stuff-informer/2014/05/23/yorkville-residents-say-heritage-coach-house-will-destroy-neighbourhood/#more-275275 So here's the question.

Why are efforts to preserve architectural history so difficult and almost always seem to bring out the worst in people?

Posted by Unstable Lives at 9:57 AM No comments: Links to this post 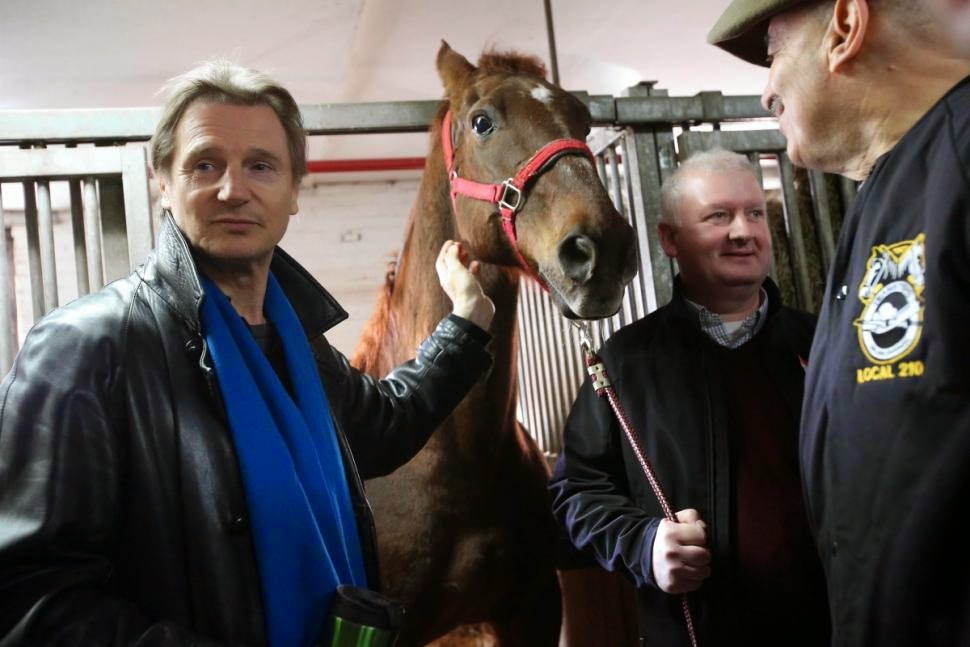 (from the NY Daily News)
Liam Neeson probably hit it right on the head when he posited that the fight to eliminate horse drawn carriages in NYC is really all about developers lusting after valuable real estate where the NY stables are currently located. It's not about the horses. It's about the stables.

Posted by Unstable Lives at 5:59 PM No comments: Links to this post

In the author's opinion old buildings with character should somehow "speak to us" about their past lives. 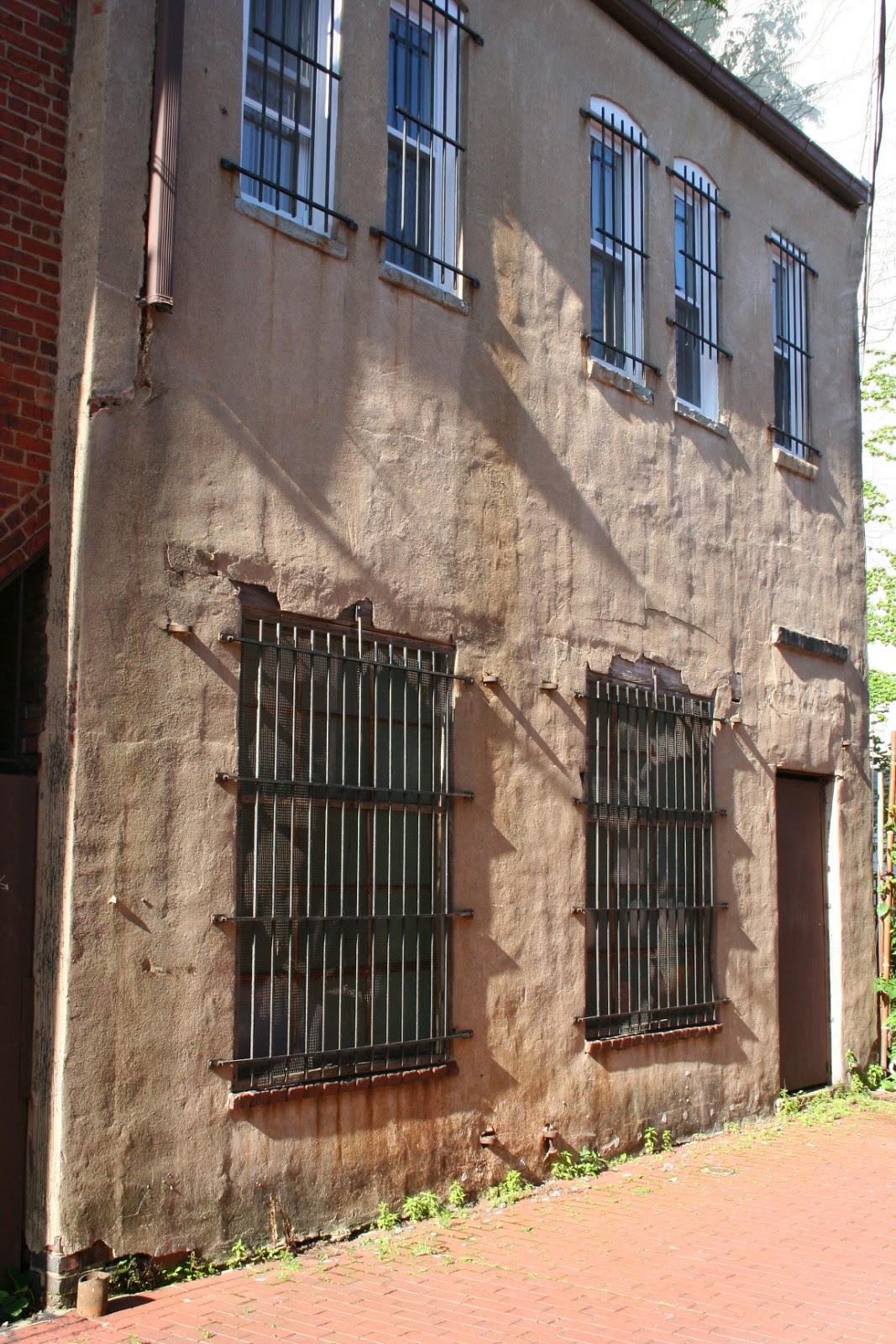 Pargeting "the bondo of buildings" usually hides many imperfections.
The five upper windows are additions to the original structure. 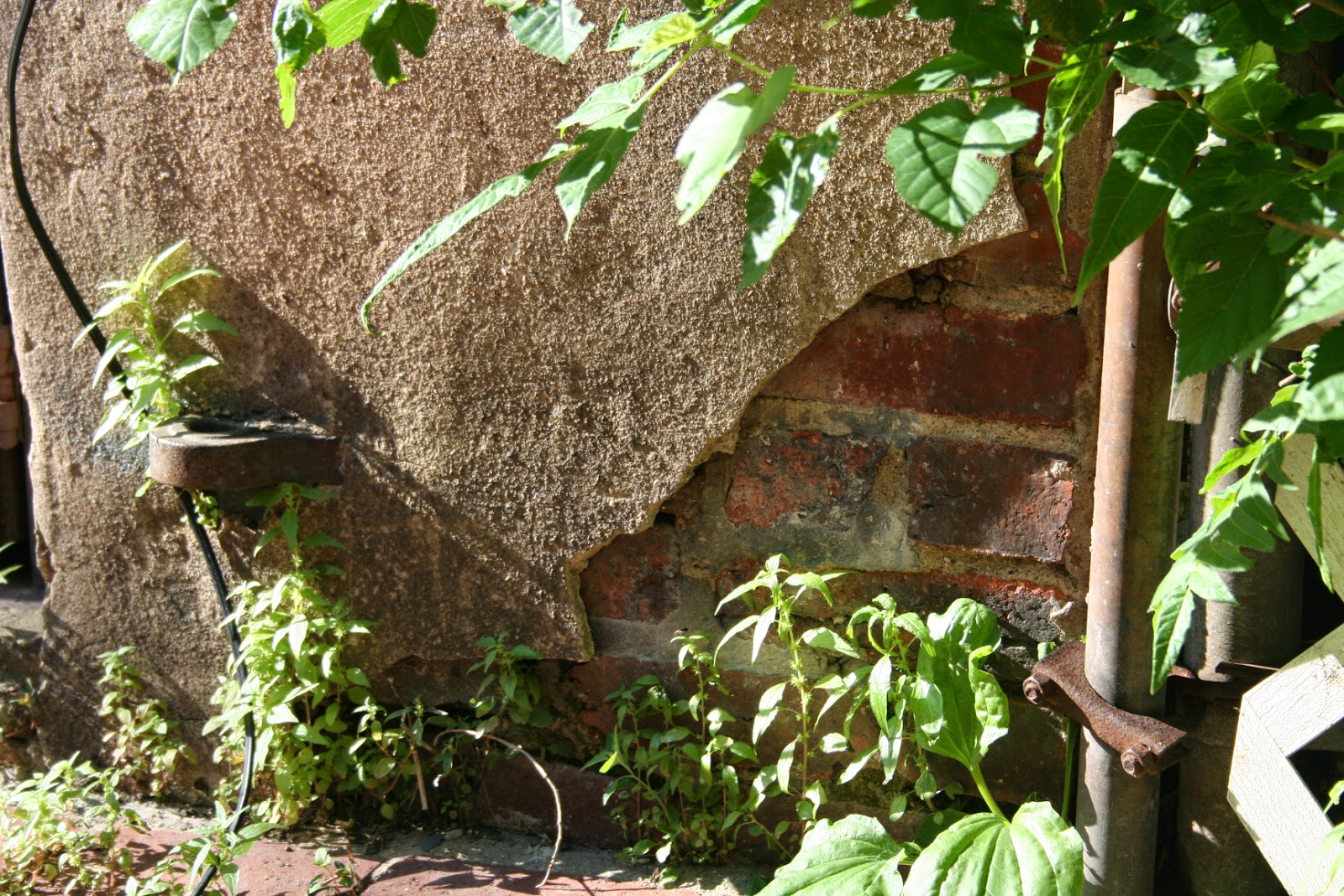 Massive weight-bearing hinge plates carried huge doors. The plates were as large as 18" in depth and 12" in width, embedded within the brick layers. Some stable walls were three bricks thick. 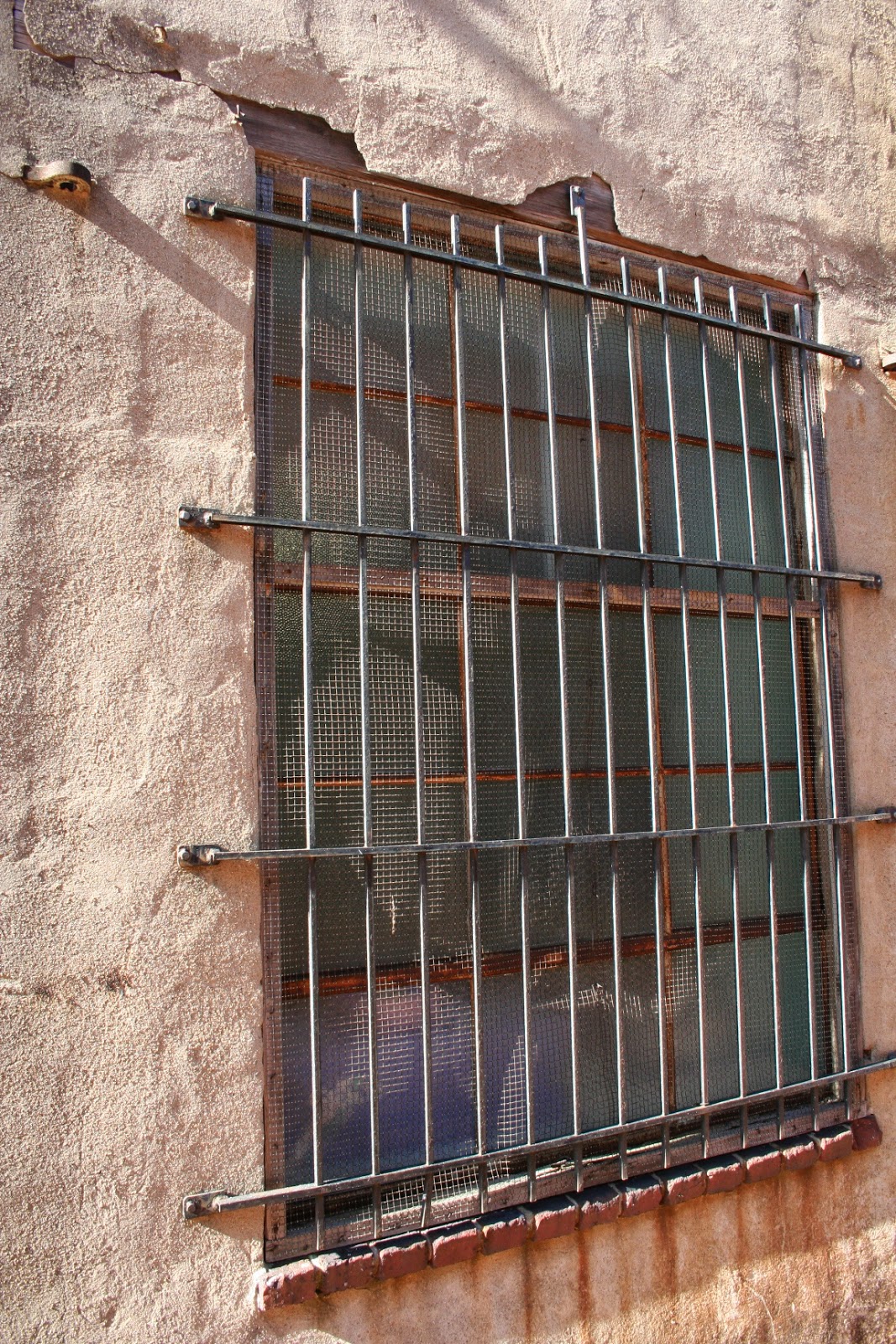 The original 100 year old wood frame peeks out from under the plaster. The marginally protective bars have trapped a screen that has probably not been used for the last 50 years. This "window" has been created in part of the space that was originally occupied by a stable door. The infill space is likely composed of an odd collection of various bricks or blocks - now hidden from view. 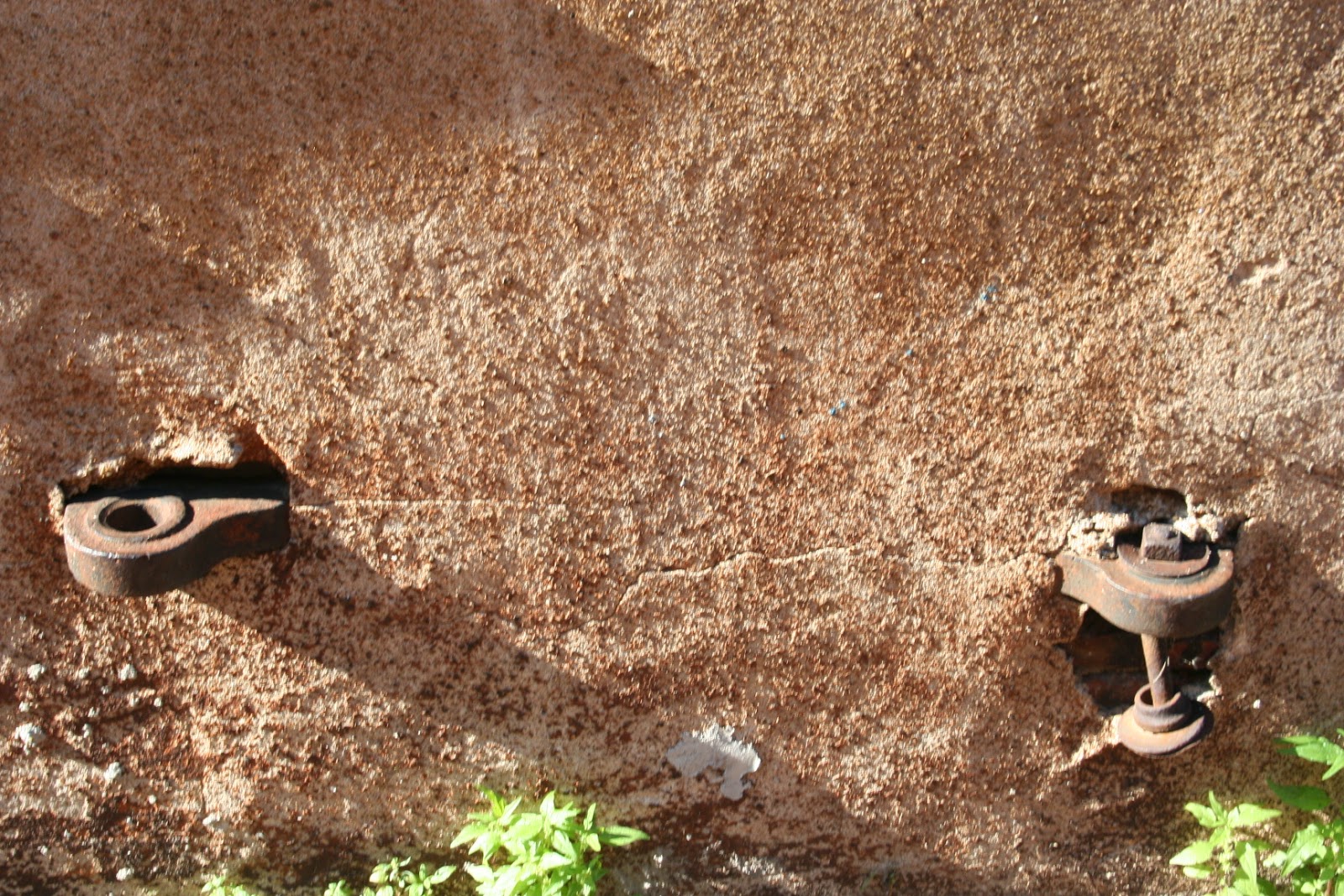 Clearly the flimsy nut and bolt in the right hinge plate served a less demanding function than the original pivot point hardware. 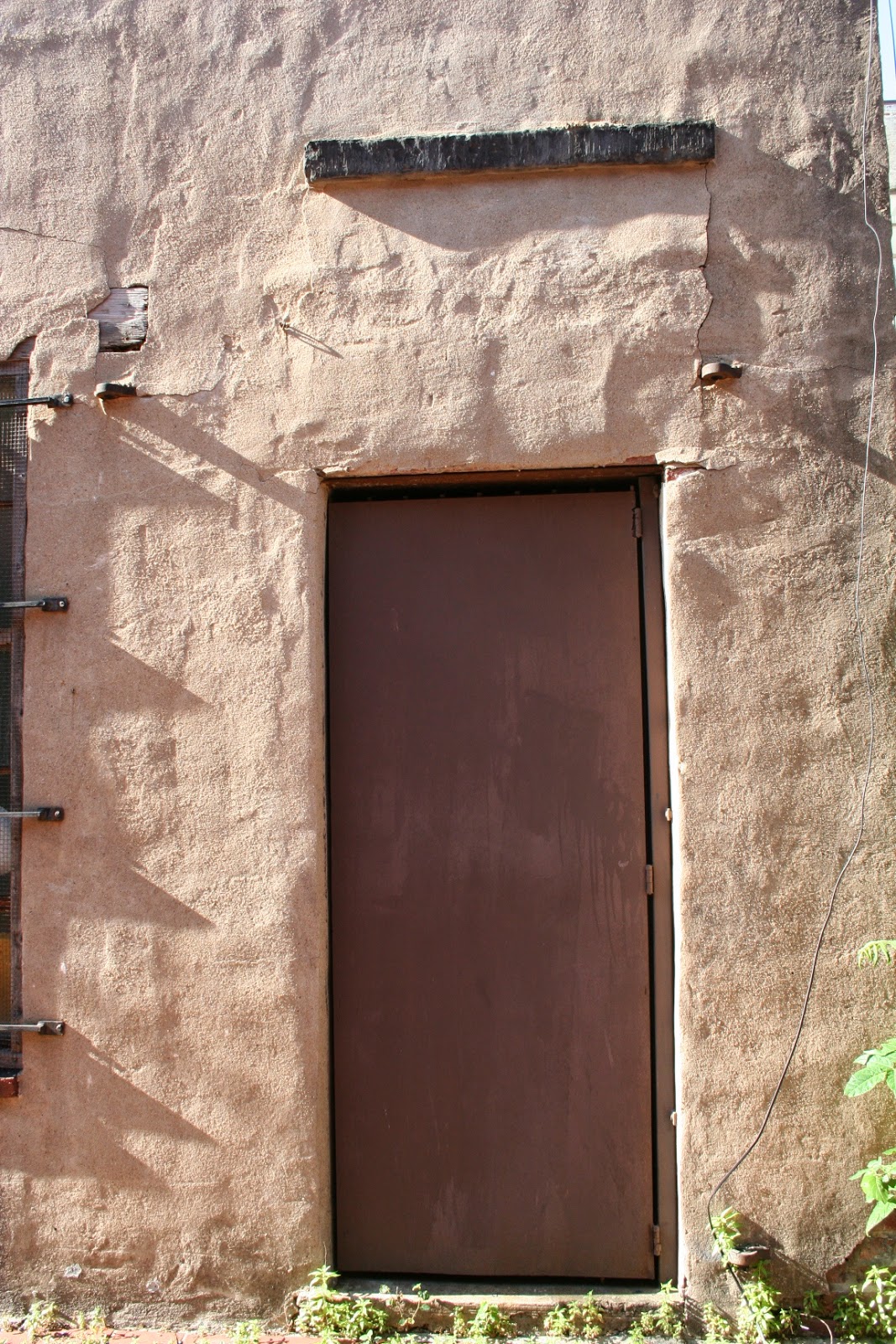 Human-scale doors on the side almost always accompanied the large horse and carriage entrances. The "free-floating" lintel may have been the based of a hayloft door at one point, although the location is a little odd. 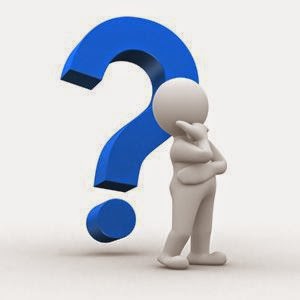 How far should one go (or be compelled) to respectfully acknowledge a building's past lives when it is being adapted to yet another life?

Posted by Unstable Lives at 8:50 AM No comments: Links to this post