Stabilizing Businesses in the Alley (Part I)

In a lovely 1978 monograph simply titled “Alleys as Hidden Resources”, Grady Clay expresses his vision of the modern day beauty of alleys. Clay’s book was reviewed in the Louisville Courier-Journal by his friend and architecture critic William Morgan. 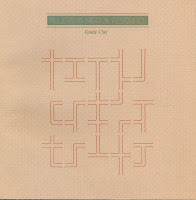 In his review Morgan writes … “Despite the fact that alleys are often seen merely as traffic shortcuts, places in which to dump trash, or as places where you wouldn’t want to meet people in the dark.” Clay points out that the alley is “an institution as American as apple pie.”

Morgan expressed the hope that Clay’s monograph “will not be forgotten or placed on a shelf as is so often the fate of such studies.” He then quotes Lewis Mumford whom he considered to be the dean of American planning historians – “I would prefer to walk in the rear alley … precisely for all those little hints of life, activity, transition which the placid visual arts of suburbia did their best to suppress or politely disguise.”

This book has indeed found new life in this author’s library shelf and on the shelf of this blog for many to appreciate - something that was unimaginable in 1978. In fact the book came into the author’s hands through the internet and the graces of William Morgan himself! It will be a valuable tool in the quest to nurture and protect the more picturesque and historic stable alleys in the city.
Posted by Unstable Lives at 2:36 PM No comments: Links to this post 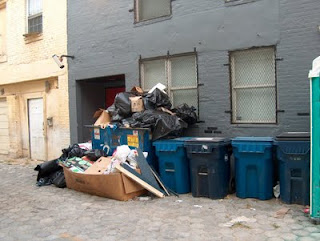 The owners of the EFN Lounge and Motley Bar have responded promptly to community questions about trash management in the alley behind the stable.

Due to the increase in traffic to the 1318 business there has been an extreme amount of waste generated.  After carefully assessing this issue and how to keep our staff and neighbors safe and in a clean environment, we have increased our waste removal to 3 days a week including Saturday.  In an attempt to maintain cleanliness, I have instructed all staff to store waste inside the building until it can be disposed of properly.  I read the blog and saw the images; I agree that it is unacceptable.

I do my best to respond positively to any concerns regarding 1318. I am open to discussion as to how waste can be disposed of in a way that eliminates a dumpster as the venue does not have an area that is away from customers on premise. Storing waste in the building near customers would be in violation of health codes.  My solution was to keep the waste in the building after the business day and I would personally load it into the dumpster for removal the following morning. This way waste is not every visible to customers or neighbors.

I do apologize for this hurdle in making our community more visible for positive growth.

Posted by Unstable Lives at 2:52 PM 3 comments: Links to this post 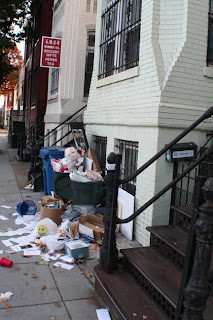 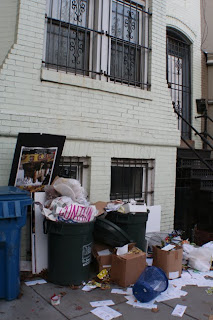 It's really not necessary to trash the neighborhood (around the corner from Azi's Cafe on 9th Street). For a more encouraging view of Shaw Living check out this video  http://www.youtube.com/watch?v=gw1Xe5dKqOU (credit goes to RenewShaw for this link).

Posted by Unstable Lives at 8:37 AM 2 comments: Links to this post 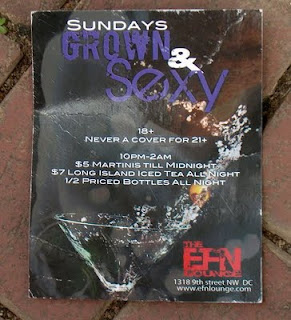 Posted by Unstable Lives at 1:21 PM No comments: Links to this post

Trash Talking in the Alley 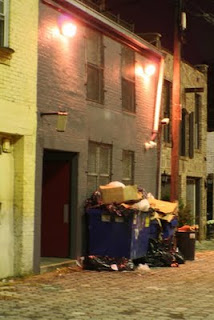 (photo behind the "EFN bar" stable in Naylor Court)

Isn't it sad that there is a persisting mentality in much of Washington D.C. that the sole purpose of alleys is for trash, vehicular access, drugs, robberies and prostitution.? Alley trash is just like graffiti. It sends a message about the neighborhood - not a good one. Some alleys in the city may be beyond salvage but the National Register Historic alleys of Blagden and Naylor Court are in their early days of restoration and desperately need protection. NPO, HPRB, DCRA, BZA, ANC's and the community - step up it up a notch! We're talk'n trash here.

Community anger is rising about how badly these alleys are being treated. Don't you think that it is beyond time to leave the past of horse manure and corruption and move into a more civilized era of people and places? Let's stop trashing this place.
Posted by Unstable Lives at 11:21 AM 6 comments: Links to this post