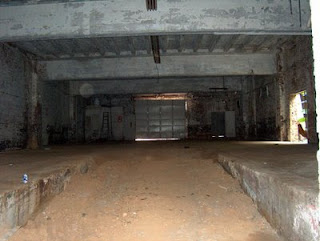 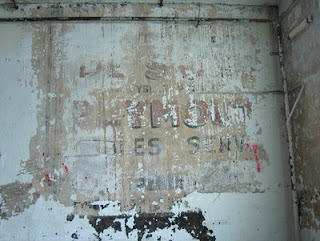 Douglas Development has recently purchased 1234 9th Street NW, a property that once housed a car dealership. The former large showroom windows were replaced by glass blocks many years ago. The space is huge, open and solid. A fading painted sign from the dealership days lingers on the North inside wall as a silent testimony to its past life. Douglas Development has also purchased several other properties on the 9th Street side of the alley (1216, 1218, 1226) as well as their associated alley structures. One of these alley buildings is a small stable that at one time in its life was a "Neighborhood Auto Repair" shop. Remnants of the signage can still be seen over the former stable door. Douglas Development has a history of respecting the Historic Landmark designation of buildings and plans to expertly and sensitively restore the little stable. Perhaps some of the development projects within this collection of buildings may eventually wear an automotive theme woven somewhere into their new lives! 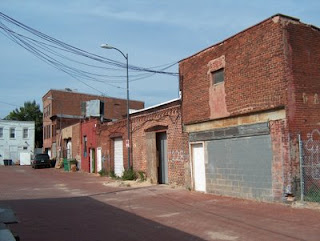 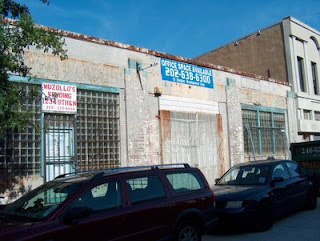 Posted by Unstable Lives at 10:44 PM No comments: Links to this post

Listen to an erudite discussion about architecture, politcal power and community activism

D.C. is a political town. And that fact inevitably influences the look and feel of our surroundings. From feuds over zoning to debates over historic preservation, Roger K. Lewis joins Kojo to explore how politics-- of the partisan and petty variety--- affect the District's 'built environment'.

Posted by Unstable Lives at 10:53 PM No comments: Links to this post

"Preservationi are accusing D.C. of neglecting its heritage. They say the city is green, lighting demolition of irreplaceable buildings. Built over 150 years ago, horse stables still line . Some are upscale homes now but one recently came tumbling down, with the city's blessing. The people who live in this corner of Shaw, with so much history, were stunned to hear the wrecking ball and saddened to see one of the old stables turned to rubble. A spokesperson for the historic preservation review board says the city approved the demolition of the old stable because it had deteriorated dramatically. Some residents are troubled since many of the city's historic buildings are in bad shape. This is not an isolated incident. Behind the old , cars park on what was a historic building. The city occasionally will approve tearing down a historic building if the developer reconstructs it, but some believe the goal often is simply to clear the way for the sale of the property. In the corner cluttered with history, some residents just hope the days of demolition will slow now that the economy is in the can."

The original story and the video from ABC 7 are linked below.

Posted by Unstable Lives at 9:37 PM 2 comments: Links to this post

The Last Auto Repair Shop Closes in the Alley 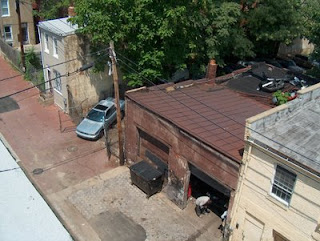 For almost 20 years Abate, a gentle and kind man, has worked in Naylor Court NW servicing the neighborhood cars and repairing damaged fenders. He learned his bodywork craft in Ethiopia where he worked for Ethiopian Airlines doing metal work in aluminum.

The alley in Naylor Court had been the home for many auto repair shops as it made the transition from stables for horses. Repairing the leaf springs and wheels of coaches was not too different from repairing the leaf springs and wheels from model T Fords. Over the past 70 years in Washington, the car sales corridor of 14th Street gradually disappeared to the point that today there is only one new car dealership in Washington. Many former car dealerships are now lofts. The alley auto shops provided a service for an impoverished community, whose cheap cars were in need of frequent repair. For years, the alley was "log jammed" with cars - three deep - which served as homes for cats, business offices for drug deals, bedrooms for prostitutes and sources of income for rogue illegal towing companies who were paid by weight for scrap metal and stolen cars. Even the DC Archives (1300 Naylor Court) across the alley from Abate's had an auto repair shop for the street cleaning trucks even as it maintained part of its structure as a huge stable. 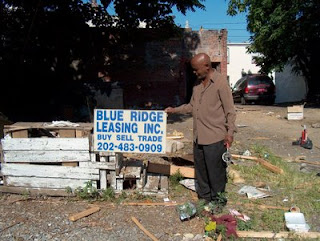 end of a chapter in the lives of the modern alley. He had a unique business model for selling cars since he had very little space. Being well known in the community, he would always have a list of cars that people were seeking. They knew the make, the model and the year. As long as the car was solid and reasonable in price and mileage it was a deal. The color did not mater. So, every car he bought was already sold!

Abate's presence in the alley ensured the safety of the alley dwellers, for he worked late hours and he and his men always kept an eye out for trouble. He will be missed by those who knew him well. The breadth of his connections and the depth of the love and respect for him within his community will ensure that he will be able to evolve into a new and better life. The Naylor Court Alley will continue to evolve as it has since its original drawings of 1797. With intelligent planning and sensitivity it can become a very special place in the heart of Washington. Designation of Naylor Court as an Historic Landmark in 1990 showed great foresight that is being rewarded today and will be for the years ahead.

The Concept of a "mews" 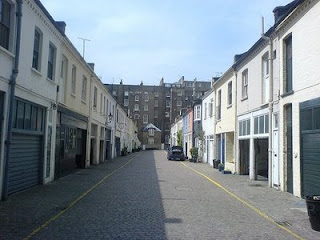 In London and many other Cities in Europe, the small back alleys were lined with stables. Today through preservation and respect for their past lives, they have been preserved. Most are homes but some are small shops and even high end (Aston Martin, Rolls-Royce, Jaguar) classic car businesses. The mews are like little villages within large cities where people know and care for each other. Not too different than at the turn of the century!
Posted by Unstable Lives at 8:56 PM No comments: Links to this post