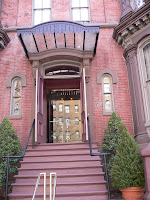 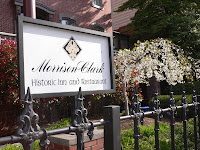 11th Street Entrance to the hotel 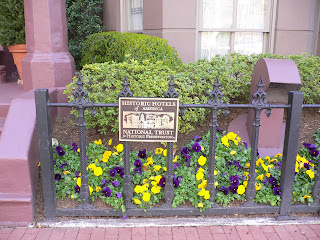 On the National Register of Historic Places since 1990 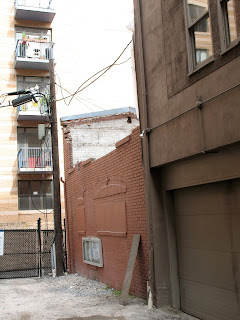 Yesterday Forrester Construction Company took down the wall that was lurching into the alley behind the Morrison Clark Hotel, thereby immediately stabilizing the stable. 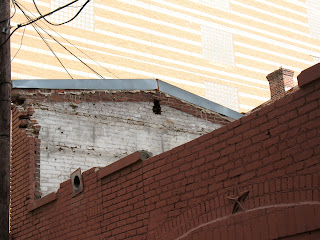 One can easily appreciate the opening for the original ridge beam just below the apex of the roof line in this photograph of the East wall.
Analysis of structural building failures like this is a little like an architectural autopsy. One takes many small clues and ultimately puts all the pieces together and reflects until it makes sense. An experienced and highly placed authority on historic preservation and Washington architecture shared the following fascinating and elegant insights into why this stable roof and wall collapsed.
“There was a ridge beam. The original brick west wall had been removed by the 1980s addition. Then the only thing holding up the ridge beam was a furred wall of nothing more than drywall on metal studs. There were no ceiling joists or collar beams tying the roof rafters together like a letter “A” so the only thing keeping the bottomless triangle of roof rafters together was friction with the 1980s addition and the nails at the rafter/ridge beam connections." 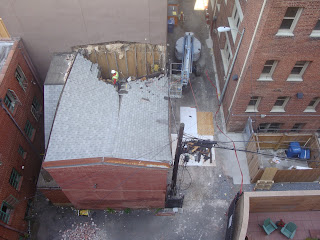 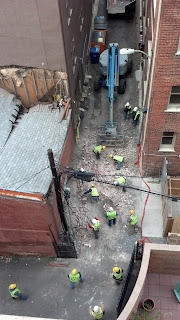 "When the builders began to remove the drywall looking for the beam’s support (which they presumed had to be somewhere under the drywall) they realized there was no support and the beam fell down. The beam fell down, but not straight because it was still nailed to all the rafters. The rafters being rigid, they don’t bend or break. If the north and south walls had been equal, the collapse would have been symmetrical and both walls would have pushed out as the diagonal rafters became horizontal (horizontal being laterally longer than diagonal).

But the South wall was buttressed by the modern exterior brick stair well. That acted like a buttress laterally supporting the south wall. That was an anchor point that didn’t move. So all the lateral movement was concentrated on the North wall pushing it way out.
The collapse was a little bit like a rubber band too, meaning that the alley wall went out then back in a little. Midway through the rafters’ fall, they reached a point of being perfectly horizontal. At that point they reached their maximum lateral dimension. But as the beam continued to fall, the rafters became diagonal again (just inverted), reducing their lateral dimension and as much as the wall/rafter connections survived the shock, cinched the North wall back in a bit. That kind of explains why the gutter on the South wall is pulled up and in too.” 
In the author's opinion, Forrester, DCRA and HPO deserve commendation for reacting so quickly and in professional synergy to ameliorate a potentially serious problem. Once rebuilt to the original configuration, this stable will regain its integrity and smile with its new facelift.
These small alley buildings may not seem like very much today to most people, but on reflection 20 years from now, they will be recognized as the crucial little ingredients that make the difference between whether an alley is interesting or not. They speak of human scale and activity - something that is hard to capture in the massive block structures that surround and dwarf them.
Posted by Unstable Lives at 7:19 AM 1 comment: Links to this post

According to a news release by Forrester Construction Company, (Feb 26, 2013) “The new addition to the inn requires preservation of a 1700s carriage house, one of the oldest buildings in Washington, DC, keeping the exterior intact while completely renovating the interior.”  http://www.forresterconstruction.com/newsAndEvents/142

“The design incorporates adjacent historic buildings, including an 1880s townhouse, a rectory and a carriage house from the 1700s, said to be one of the oldest buildings in the District. The carriage house's exterior will be maintained and its interior will be completely renovated.” (Rebecca Cooper Washington Business Journal) http://www.bizjournals.com/washington/blog/2013/02/construction-begins-on-morrison-clark.html

This week the Western section of the roof on the alley-nested stable collapsed, causing the front wall to separate from the adjacent building and begin to lurch into the alley. 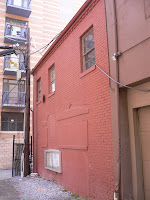 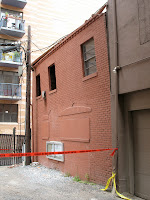 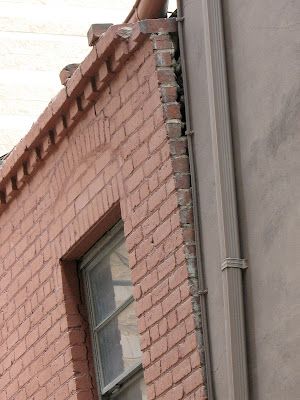 It is clear that there are no interdigitating bricks in this essentially “freestanding” West wall. The original wall was apparently removed some time in the 1980’s. 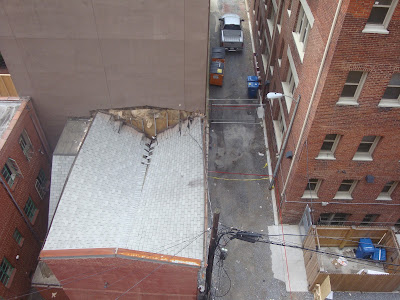 Note the lack of major beam structural support and the absence of the original wall. (Photo courtesy of Kathy McEnany)

From the overhead photo it's evident that at some point in its history, the stable relinquished its Western wall and thus did not share a common wall with the building next door. There also does not appear to be any evidence of a center keel beam or robust joists to distribute the roof stresses. The "shared wall" was more of an abutment than a load-bearing "party wall." In a way, it’s surprising that this collapse did not occur earlier.

The Morrison Clark stable preservation is “part of the deal” for their large expansion process. So what to do now? Yesterday, a representative of the construction company said that after discussions with HPRB/HPO and DCRA, the decision was made to remove the roof and to remove the bricks on the second floor down to the top of the first floor. The bricks will be saved and the stable rebuilt as it was, preserving the characteristic architectural details of the classic carriage and horse entrance, windows and stable hand door. Simply “shoring up the building” turned out not to be an intelligent or practical option at this point. It was also dangerous, given that the building essentially only has three walls of its own.

Meanwhile, the alley is closed for safety reasons.

The upcoming precise major architectural stable surgery will be an interesting process to follow. Thankfully, the city is increasingly recognizing the value of these little structures as meaningful reminders of the contribution of the DC alley system and its culture to the history of the city. Some Washington alleys have become a wasteland through past, outdated urban planning blind servitude to alleys for trash and services. These wasteland alleys cannot be reclaimed. However there are many, many alleys with their small charming alley buildings still intact in Washington that can and will be preserved to thrive in new lives of adaptive reuse.

Application for recognition on the National Register of Historic Places in 1990.
(This application is a fascinating read)


Posted by Unstable Lives at 8:42 AM 3 comments: Links to this post